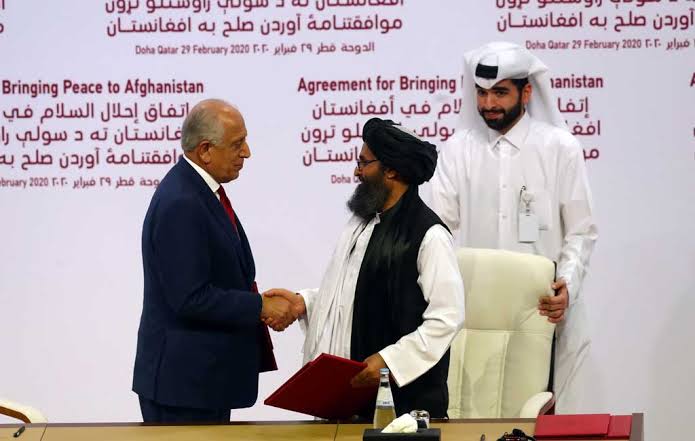 During the meeting, the two sides discussed the Afghan peace process, the release of prisoners, the long-awaited intra-Afghan peace negotiations and related issues, the Taliban’s statement further read.

Country’s economic growth was also a topic of the discussion between the Taliban officials and Mr. Boehler, Mujahed continued in the statement.

“Discussions were also held with Mr. Adam Boehler about his economic strategy and plans for numerous regional countries aimed at the financial growth, reconstruction and development of future Afghanistan”, read the press release.

In a pre-announcement the U.S. State Department said on June 28 its special envoy for the Afghan peace had departed for travel to Doha, Islamabad and Tashkent to “urge support for all Afghans to meet their remaining commitments ahead of intra-Afghan negotiations, specifically reduced violence and timely prisoner releases.”

Ambassador Khalilzad, CEO Boehler, and their delegation also conducted meetings with Afghan officials throughout the trips remotely via video.

Meanwhile, the U.S. Special Representative for Afghanistan Zalmay Khalilzad and Foreign Ministers of the five Central Asian countries discussed strengthening regional economic cooperation and fighting the spread of COVID-19 in the “C5 + 1” format through a video conference.