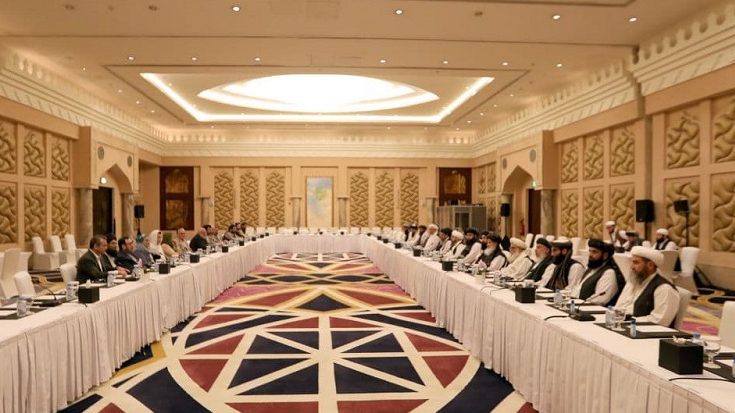 Speaking to TKG on Tuesday, Ghulam Farooq Majroh, a member of the Islamic Republic’s negotiation team, said discussions over a ceasefire was the government delegation’s top priority.

It is expected the Taliban negotiators also clarify their priorities to begin discussions on details of the agenda, according to Mr. Majroh.

Naeem Wardak, spokesman for the political office of the Taliban, also spoke to The Killid Group, saying meetings and discussions to sort out items of the agenda were underway and thus there will be a final conclusion following the meetings.

Mohammad Karim Khalili, Afghan Former Vice President and leader of the Hezb-e Wahdat-e Islami, in the meantime departed for a two-day trip to Pakistan, where he called on the neighboring country’s senior officials including Foreign Minister Shah Mahmoud Qureshi and Prime Minister Imran Khan to discuss the ongoing Afghan peace process.

Gran Hewad, spokesman for the Afghan Ministry of Foreign Affairs, however, said it was Mr. Khalili’s personal trip and had nothing to do with the Afghan government.

With reference to the leader of Hezb-e Wahdat’s trip to Pakistan, political experts, however, believe the neighboring country has not been dealing with the peace process at government level—since the very beginning of the Afghan peace process.

Nasrullah Falak, Kabul-based university lecturer, said speaking to TKG that Mr. Khalili’s trip to Pakistan was not unusual; the country, for half a century, has been dealing with issues related to Afghanistan at individual and group levels.

If it continues, it will be, in fact, a weakness of Afghanistan’s diplomacy and the government.

Mohammad Karim Khalili departed Monday for travel to Pakistan to meet the neighboring country’s top officials to discuss Afghanistan’s peace process. His trip followed Former Mujahideen leader Gulbuddin Hekmatyar’s trip to Pakistan, where he met with officials in the country and talked about the Afghan peace process.

Taliban Not Living up to Commitments: Afghan Gov’t

Violence in Afghanistan Soars amid Second Round of Peace Talks