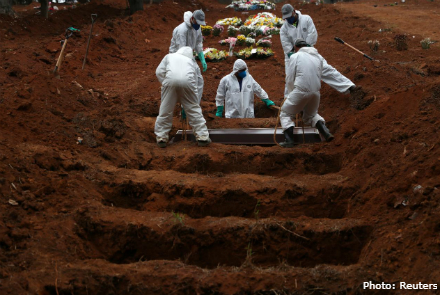 Brazil recorded 41,857 new cases of the novel coronavirus in the past 24 hours and 1,300 additional deaths, the Health Ministry said on Tuesday.

Mexico’s Health Ministry on Tuesday reported 7,051 new confirmed coronavirus infections and 836 additional fatalities, bringing the total in the country to 311,486 cases and 36,327 deaths.

The government has said the real number of infected people is likely significantly higher than the confirmed cases.

China reported on Wednesday six new coronavirus cases in the mainland for July 14, up from three cases a day earlier, the health authority said.

All of the new infections were imported cases, the National Health Commission said in a statement. There were no new deaths.

As of July 14, mainland China had a total of 83,611 confirmed coronavirus cases, it said. China’s death toll from the coronavirus remained unchanged at 4,634.

New Zealand must prepare for new coronavirus outbreaks as the pandemic spreads globally but will not drop its elimination strategy if community transmission was discovered, Prime Minister Jacinda Ardern said on Wednesday.

Ardern said the epidemic was now “exploding” outside New Zealand and countries that had been models in the fight against COVID-19 had now experienced further community outbreaks.

The government released a new framework on how it intended to fight the virus in the event of new cases, with elimination still the central strategy.

“No system is 100% fool proof and around the world we are seeing even the most rigorous measures being tested by the virus,” she told reporters in Wellington.

The South Pacific nation last reported a case of community transmission two-and-a-half months ago. It has recorded 22 deaths from nearly 1,200 confirmed cases as of Wednesday.

New Zealand had vowed to eliminate, not merely contain, the virus, which meant stopping transmission for two weeks after the last known case was cleared.

Officials in Australia’s most populous state of New South Wales said elimination is no longer possible there due to fresh outbreaks following the easing of lockdown restrictions.

Republicans Back Sale of TikTok’s US Ops to US Company