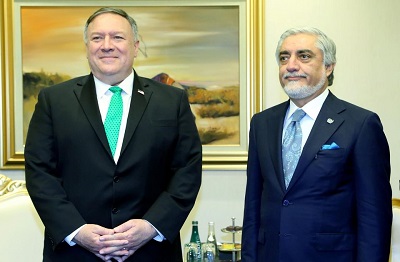 The Chairperson of High Council for National Reconciliation Abdullah Abdullah met with U.S. Secretary of State Mike Pompeo on the sidelines of Qatar talks which began on Saturday, September 12.

In a statement, the office of national reconciliation council announced that Dr. Abdullah Abdullah head of the council met with the U.S. Secretary of State Mike Pompeo as well as with the Qatari Deputy Prime Minister and Foreign Minister Mohammed bin Abdul Rahman bin Jassim Al Thani on the sidelines of the intra-Afghan talks in Doha.

In the meeting with U.S. Secretary of State Pompeo, head of the peace council said, “We have come to end the war and conflict and to establish a lasting and just peace in Afghanistan,” as he was quoted in the statement.

Secretary Pompeo said that U.S. supports efforts to achieve peace and bring the longest-running war of Afghanistan to an end.

Dr. Abdullah meanwhile met with the Qatari Deputy Prime Minister and Foreign Minister and thanked him for his government’s efforts to achieve peace in Afghanistan and for hosting the opening ceremony of direct talks between the Afghan government and the Taliban.

Sheikh Mohammed affirmed the commitment of Qatar to provide political support to the peace process in Afghanistan and to continue dialogue between all spectrums to reach a political solution.

Mr. Pompeo also met today with Taliban Political Deputy Mullah Abdul Ghani Beradar and members of the Taliban negotiating team in Doha, Qatar, on the historic occasion of the start of peace negotiations, according to a statement by the office of Principal Deputy Spokesperson Cale Brown.

U.S. Secretary urged the Taliban to seize this opportunity to forge a political settlement, said the statement, and reach a comprehensive and permanent ceasefire.

The first formal talks between the Afghan government and the Taliban began with an opening ceremony on Saturday 12, a day after the government negotiating team left Kabul for the Qatari capital of Doha where the talks were scheduled to begin.

The main speakers at Saturday’s opening ceremony were Dr. Abdullah Abdullah, who is head of the Afghan High Council for National Reconciliation, the deputy leader of the Taliban political office Mullah Abdul Ghani Baradar and U.S. Secretary of State Mike Pompeo.

The talks follow the February’s agreement reached between the United States and the Taliban on the withdrawal of U.S. troops.

Under the U.S.-Taliban deal signed on February 29, the intra-Afghan talks were scheduled to begin on March 10, but were stalled due to the disagreements over the controversial prisoner swap process.