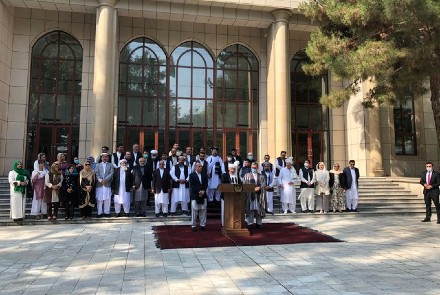 President Ashraf Ghani, addressing the nation on Eid on Friday, ordered the release of 500 Taliban prisoners in response to the group’s three-day ceasefire announcement, and said he hoped the truce will extend.

Ghani said the 500 prisoners are not part of the list given to the Afghan government by the Taliban and that these inmates will be released within the next four days.

According to Ghani, the Afghan government has so far released 4,600 Taliban prisoners.

Ghani said the Afghan government has a strong position both in war and in peace.

He said that COVID-19 is still a threat, therefore, people should observe health advice during Eid.

The president vowed to fight the endemic corruption in public offices and boost security in the country.

This comes as the Taliban also completed the release of 1,000 prisoners called for in the peace agreement signed in Doha.

A spokesman of the group, Suhail Shaheen, said on Twitter that they freed 82 prisoners on Thursday, bringing the total released by the Taliban to 1,005.