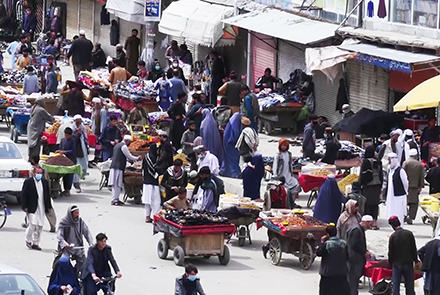 The Afghan government is preparing to resume the bread distribution process for families in need as the COVID-19 crisis continues amid questions over the transparency of the program in which millions of dollars have been spent so far.

Each person in a family gets two pieces of bread–naan–per day from a bakery near their homes in a process that is supposed to be implemented in three phases. The first phase, the Presidential Palace said, has ended and the second will begin soon.

According to the Ministry of Finance, the bread distribution process in the first phase cost Afs2.8 billion (over $36 million) of which Afs1.15 billion (over $14.8 million) was spent in Kabul.

Figures by the Kabul Municipality indicate that 311,320 families were covered in Kabul for 40 days in the first phase, receiving 15 million naan.

“It will take some time to begin the second phase as we want to fill the gaps that existed in the first phase such as differentiating between deserving families,” said Mohammad Hedayat, a media adviser at the Presidential Palace.

The head of Kabul Municipality’s media office, Nemat Barikzai, said the program started on April 29 and continued for 40 days.

It is not clear how much the government will invest in the next two phases of the program.

Vulnerable families said the process has stopped for the last 15 days.

Mohammad Talib, a Kabul resident who is a day laborer, said they received 5-10 naan per day during the program.

“The five naans were good as we received it by making no effort,” he said.

Soldier Who Killed His Colleagues in Insider Attack Arrested