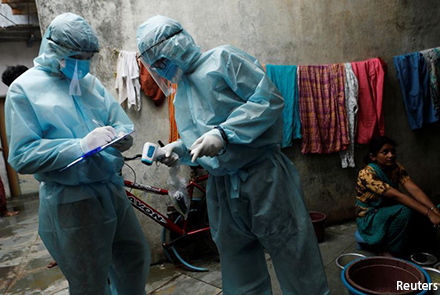 India reported a record jump in coronavirus infections on Saturday, a day after the government in the capital New Delhi ordered hospitals to cancel any leave and have workers return to duty immediately.

It now has the world’s fourth highest number behind the United States, Brazil and Russia.

In a memo to all government hospitals on Friday, the Delhi government ordered all leave cancelled and said further leave would only be granted under the most compelling circumstances.

A number of countries continue to evacuate their citizens from India, amid concerns hospitals in major cities such as Delhi and Mumbai may be overwhelmed.

Ireland became the latest country to warn its citizens that medical assistance may become difficult with India’s sharp spike in cases and urged them to consider making use of a series of evacuation flights in the next few weeks.

In an email seen by Reuters, the embassy’s second secretary, Máirtín Cronin, warned Irish citizens that access to medical care for COVID-19 and non-COVID-19 treatment may become increasingly difficult in the coming period.

Since March, countries including Germany, France, Italy, Belgium, the Netherlands, Ukraine, Israel, China and Malaysia have approached the government to allow them to evacuate their citizens, according to local media reports.

WHO Sending Team to China to Probe Coronavirus Origins