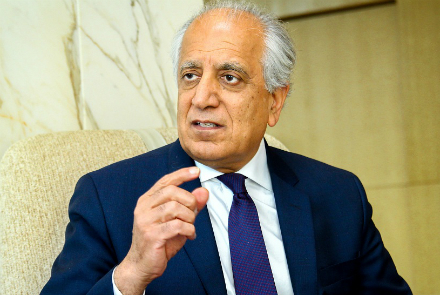 US peace envoy to Afghanistan Zalmay Khalilzad on Twitter condemned the attack on the human rights workers that occurred on Saturday, calling it “anti-human.”

“The targeted killing of Fatima Khalil and Jawid Folad, two Afghans dedicated to the cause of fundamental human rights, is an anti-human act. We condemn this terrorist attack in the strongest possible terms,” Khalilzad tweeted.

In another tweet Khalilzad said: “Those opposed to peace start fires they hope spread quickly and smolder indefinitely. We support the overwhelming demand of Afghans to overcome these odds and continue the march to a permanent and dignified peace and an Afghanistan in which everyone’s rights are respected.”

Two employees of the Afghanistan Independent Human Rights Commission (AIHRC) were killed in an IED explosion that targeted their vehicle in Kabul on Saturday, the commission confirmed.

One of the victims was a woman who was serving as a legal adviser to the commission. Another victim was a driver.

“I did not know them personally. I understand that Fatima was a courageous young person deeply dedicated to human rights for all Afghans, rights which are universal and Jawid was a long-time AIHRC employee doing his valued part,” Khalilzad tweeted.

Fatima Khalil, 24, was a donor liaison officer at the Afghanistan Independent Human Rights Commission and Jawid Folad was a driver at the organization.

Kabul police in a statement confirmed that it was a magnetic IED blast.

Taliban denied their group involvement in the incident and condemned the attack.

The group also said that such attacks are conducted by the circles who recently attacked hospital and target Ulema members in the mosques.

The incident was condemned both domestically and internationally.

UNAMA said “there can be no justification for attacks against human rights defenders” and an immediate investigation is needed “with perpetrators held to account.”

President Ashraf Ghani said such attacks on civil service workers, especially judicial workers and those who serve to defend human rights, were crimes against humanity and against Islamic values.

President Ghani also ordered an investigation into the attack, the Presidential Palace says.

Abdullah Abdullah, Chairman of the High Council for National Reconciliation also condemned the attack in a tweet.

“I am deeply saddened to hear that two employees of AIHRC lost their lives today in a car bombing in Kabul. Expressing my condolences, I ask that the authorities take these repetitive attacks seriously and put more effort protecting civilians and combating terrorism,” Abdullah tweeted.

“Appalling news of the killing of the employees of AIHRC today. I strongly condemn the attack targeting human rights advocates who work to protect the Afghan people,” said NATO SCR Stefano Pontecorvo.

Indian Amb. Vinay Kumar strongly condemned the attack on two staff members of the human rights commission, saying “targeted killings must stop, and their perpetrators and external sponsors must be brought to justice.”

Pakistan’s top envoy to Afghanistan, Ambassador Mohammad Sadiq, condemned the attack against the human rights commission’s employees, saying those who want to ‘sabotage’ the peace process are behind it.

The EU mission in Afghanistan says the attack on the AIHRC is one “against fundamental democratic values,” which must be “stood up for” along with human rights going into peace negotiations.

Ernst Noorman, ambassador of the Netherlands in Kabul, condemned the attack on AIHRC employees in Kabul, saying it is unacceptable and “only enemies of peace can do this.”

“A shocking and cruel attack on human rights defenders,” says Patricia Gossman, Associate Asia director for Human Rights Watch. “There can be no justification for such a crime.”

“The attack today on the AIHRC is unacceptable,” said US Chargé d’Affaires Ross Wilson. “We call on all those who love Afghanistan to break this cycle of violence and death, to end the impunity and indignity of such attacks on the Afghan people, and to work for peace.”

Amnesty Intl said the attack “must be immediately and effectively investigated with the perpetrators held accountable.”

The Italian embassy in Kabul condemned the attack “in the strongest terms, saying “attacks against civilians, healthcare and human rights operators must stop now.”

The Turkish embassy in Kabul condemned the attack on AIHRC staff members and said “we offer our condolences for the victims and expect perpetrators to face justice.”

The British ambassador in Kabul, Alison Blake, tweeted she is “deeply shocked” at the killing of two members of the human rights commission.