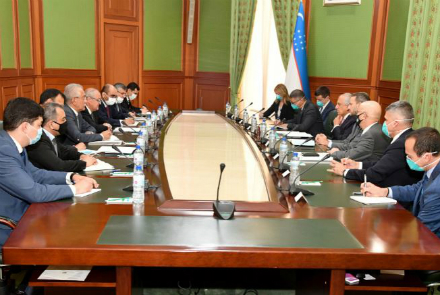 The US peace envoy for Afghanistan, Zalmay Khalilzad in a tweet on Wednesday said that he had “good meetings” in Tashkent with Uzbek officials and others in the C5+1 and discussed the latest on the Afghan “peace process and the critical role Central Asia has played.”

“We discussed…the critical role Central Asia has played and will continue to play in pursuit of peace; how it will benefit from peace with increased regional connectivity, trade and development,” said the envoy, adding: The US’s Development Finance Corporation “is prepared to invest in the region’s future.”

The US appreciates the cooperation and assistance of the C5+1 (Uzbekistan, Tajikistan, Turkmenistan, Kazakhstan and Kyrgyzstan plus the United States), Khalilzad said, adding that “We will need to work together to promote and encourage a political settlement when intra-Afghan negotiations begin.”

C5+1 is a format for dialogue and a platform for joint efforts to address common challenges faced by the United States and the five Central Asian states.

On Tuesday, Abdullah Abdullah, chairman of the High Council for National Reconciliation, held a virtual meeting via video conference with President Ashraf Ghani and Khalilzad and they discussed progress on the peace process and the prospect of intra-Afghan talks, Abdullah’s office said.

The meeting also focused on violence reduction, the prisoners’ swap and regional support for the Afghan peace process. The three sides agreed that a reduction in violence is a core component of moving towards an Afghan-owned and Afghan-led peace process, the statement said.

“At the meeting, the US side stressed that peace in Afghanistan is equivalent to peace in the region and the United States is ready to invest in this sphere,” it added.

On Monday, the Taliban and US delegations discussed via video conference Intra-Afghan talks and other related issues to Afghanistan on Monday, Taliban’s political office spokesman Suhail Shaheen said.

Shaheen said that Taliban deputy Mullah Baradar and his delegation spoke with US Secretary Mike Pompeo via video conference and discussed foreign troops’ withdrawal based on the Doha agreement, the prisoners’ release, intra-Afghan talks and reducing the level of fighting.

According to Shaheen, during the conference, Mullah Baradar said that the withdrawal of foreign troops should take place according to the timetable.

The US Secretary Mike Pompeo said the Taliban “has reduced violence by stopping their attacks on cities and key military bases but added that all sides should reduce violence in the country,” Shaheen said.

However, in a recent report, the National Security Office claimed that a week earlier in June was the “bloodiest” in Afghanistan in the last couple of decades, citing hundreds of attacks in rural areas.

According to Shaheen, Mullah Baradar called on the US Secretary of State to release Haji Bashar from a US prison, as well as the remaining Afghan detainees at Guantanamo Bay.

During the meeting Mullah Baradar urged Taherian to deal with Afghan migrants in Iran “based on Islamic brotherhood.”