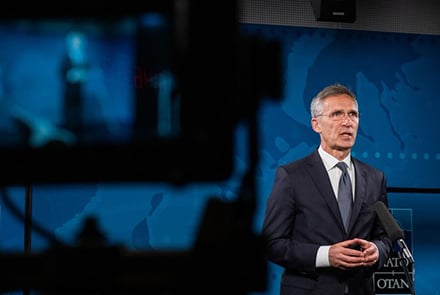 “Allies reiterated their strong commitment to Afghanistan’s long-term security. This commitment is vital to ensuring the peace process continues to move forward,” said the NATO chief.

He called on the Taliban to live up to their commitments for a lasting peace in Afghanistan.

“To support peace process we’re adjusting our presence in Afghanistan and we will consider further adjustments in troop levels in close coordination with allies. Taliban have to live up to their commitments, take part in intra-Afghan negotiations & make real compromises for lasting peace,” Stoltenberg said.

On peace, the NATO chief said: “To support the peace process, we’re adjusting our presence in Afghanistan and we will consider further adjustments in troop levels in close coordination with Allies.”

On Taliban-Al Qaeda ties, the NATO chief said: “The Taliban has to break ties with Al Qaeda and other terrorist organizations.”

He said that NATO is ready for further troop reduction in Afghanistan, but it depends on the developments on the ground in the country.

The statement comes as the Afghan government and the Taliban are engaging in a prisoners swap process that is aimed to cement concrete steps for peace.

Under the US-Taliban peace deal, the Taliban demanded the release of their 5,000 prisoners from the Afghan government to create solid grounds for intra-Afghan talks.

The Taliban have also pledged to release 1,000 Afghan government hostages.

So far the Afghan government has released 3,000 Taliban prisoners.

However there is an unofficial ceasefire going on between the Afghan government and the Taliban, but violence continues to take lives from the Afghan civilians and members of the security forces.

In the latest spate of violence, at least 12 Afghan security forces were killed and five others were wounded in a Taliban attack in northern Jawzjan province on Tuesday night, a local official said on Wednesday.

Also in the north, At least five security forces were killed and seven others were wounded in a Taliban attack in northern Kunduz province on Tuesday night, a security source said on Wednesday.

The attack took place in the Talooka area in Kunduz city, as a group of Taliban attacked security checkpoints, said the source, adding that “the Taliban stole two Humvee vehicles.”