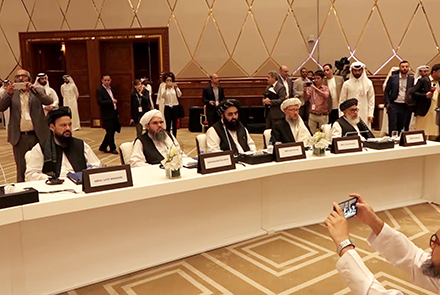 An official of the State Ministry for Peace Affairs on Monday said they expect the initial session of the intra-Afghan negotiations to begin in the near future, although the Taliban has previously stated that the process will not begin until the complete release of Taliban prisoners detained by the Afghan government, as called for in the US-Taliban agreement signed in February.

The Afghan government has so far released 3,005 Taliban prisoners and has vowed to complete the release of 5,000 inmates to open the way for the direct talks between a team from the Afghan government and the Taliban. Initially, the talks will take place in Qatar, said officials.

A spokesman for the State Ministry for Peace Affairs, Najia Anwari, said the government’s negotiation team is ready to attend the talks and has taken measures to thwart coronavirus threats.

“The negotiations might begin in Qatar. Our negotiation team is fully ready,” she said.

The release of Taliban prisoners, the start of the intra-Afghan negotiations and the creation of a national and international consensus on Afghan peace will be the main agenda of the talks, said Gran Hewad, spokesman for Ministry of Foreign Affairs.

The former head of the National Directorate of Security, Rahmatullah Nabil, said the government should pay attention to the quality of the team.

“Which values are we agreeing to on behalf of the Islamic republic? These values should be defended even if we have five members on the delegation,” said Nabil.

Abdul Rahman Wardak, MP, criticized the High Council for National Reconciliation led by Abdullah Abdullah for not making an effective effort for peace so far.

“The activities of the High Council for National Reconciliation are moving slow,” he said.

The Taliban, according to a journalist, have made the release of 5,000 of their prisoners by the Afghan government a condition for the start of the talks.

“(The release of prisoners) will take some weeks and then the start of the negotiations will also take few weeks, but right now the focus is on the issue of when the Afghan government will release (the remaining) 2,000 prisoners,” said Sami Yousafzai, a freelance journalist.