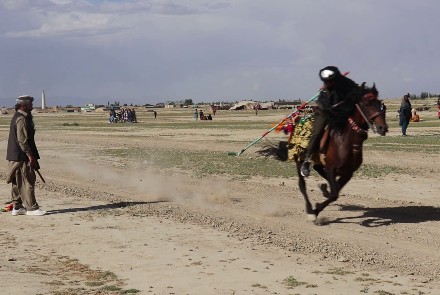 A number of tent-pegging participants in Paktika are petitioning the government to build precisely-specified grounds for them to play the game, which is an ancient cavalry exercise in which a mounted participant with a sword or lance approaches ground targets 100 meters away.

“We hold these games a lot these days and we also play on national days, Eid days and New Year, so we need separate grounds,” said Sharbat Khan, a participant.

Participants say that the game is held in different ways in this province–and started a long time ago–and now a large number of young people have turned to the sport.

Tent-pegging has a long history in Afghanistan and the game has many fans – particularly in the eastern provinces.

Players say that the game is played in different ways and in groups of 10 to 12 people.

“The price of horses for this game ranges from six hundred thousand to two million afs,” said Yar Mohammad Minawal, another player.

Residents of Paktika province say that the people of this province have been playing the game since ancient times, and now they are holding competitions on national and festival days with the participation of players from neighboring provinces.

“Our ancestors were so enthusiastic about this game that they made all the equipment for this sport from silver,” said Raz Mohammad, a player.

The tent-pegging competitions are held in fields with an area of 200 meters, where a player on horseback riding at a gallop moves from a distance of 100 meters to the target in the ground.

Tent-pegging refers to a specific mounted game with ground targets as well as to an entire class of mounted cavalry games involving edged weapons on horseback.

Shpageeza Cricket League to Begin in September in Kabul