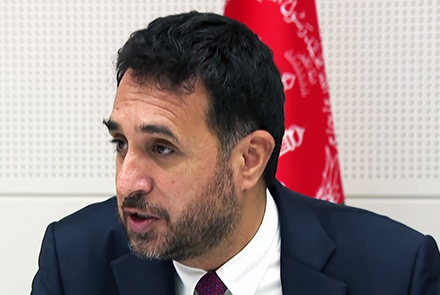 Acting Defense Minister Asadullah Khalid on Thursday said that the Taliban were killed in yesterday’s Herat airstrike and “we will share evidence–including footage–with the media.”

On Wednesday, at least six Taliban local commanders were killed in an airstrike in Adraksan district of Herat province, local officials said.

But the residents claim that at least eight civilians were killed and nearly 20 others were wounded in the airstrike attack, which they say targeted a wedding party.

A number of witnesses and those wounded in the incident say that aircraft also targeted those who were fleeing the area after the bombing of the wedding ceremony.

Women and children are also among the dead and wounded, residents said.

The US peace envoy Zalmay Khalilzad tweeted on Thursday morning that the last 24 hours have been “very violent” with “many losing their lives.”

Khalilzad condemned the Afghan airstrike in Herat, saying photos and eyewitness accounts suggest “many civilians including children” were killed.

Khalid, speaking at a ceremony held at the Ministry of Defense to introduce new Chief of Army Staff General Yasin Zia, said that “the government is ready for intra-Afghan talks, but so far they have not started yet despite the government’s release of Taliban prisoners.

“We have information that some of the released prisoners have returned to war and even some of have been killed,” Khalid said.

Despite the US and Taliban agreement, “the enemies have not reduced attacks. They have even increased them, compared to last year,” he said.

The total number of detainees released by the Taliban is 861, while the government has released 4,250.

The US-Taliban deal states that up to 5,000 Taliban prisoners should be released by the Afghan government ahead of the intra-Afghan negotiations.

The process should have happened 10 days after the peace deal, according to the agreement but it still has not been completed yet.

Assessments conducted by Afghan News indicate that 250 Afghan security force members were killed and over 300 more were wounded in 220 attacks staged by the Taliban over the past three weeks in eleven provinces of the country.

The assessment indicates that the majority of casualties among the government forces occurred in the north and southeast regions of the country.

The Afghan government does not want to provide an exact detail about the casualties of the government forces but insists that the Taliban’s casualties “are double” that of casualties among Afghan forces.

Under the US-Taliban peace agreement, which was signed in Doha on February 29, the Taliban committed to not stage attacks on the key highways and provincial capitals.