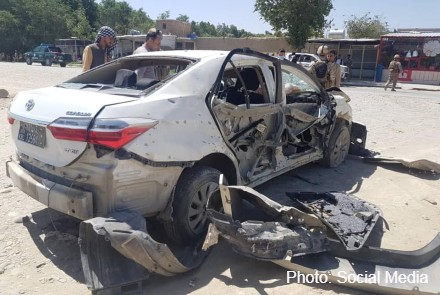 Two employees of the Afghanistan Independent Human Rights Commission (AIHRC) were killed in an IED explosion that targeted their vehicle in Kabul this morning, the commission confirmed.

One of the victims was a woman who was serving as a legal adviser to the commission. Another victim was a driver.

The incident happened in PD12 of Kabul in the Pul-e-Charkhi area in the east of the city early on Saturday morning when the two employees were headed to their office.

Kabul police in a statement confirmed that it was a magnetic IED blast.

This comes almost a week after an explosion in Paghman district, Kabul province, killed four civilians, all of whom were family members of Afghan writer Assadullah Walwali. The incident happened when the family was en route to Kabul on June 19.

According to AfgarishNews findings, over 12 IED blasts happened in Kabul from May 18 to June 19, including two explosions that targeted two key mosques in the city.

At least 12 civilians were killed and 40 others were wounded during this period, according to the findings.